In 2009, Ryanair made a decision to provide Line maintenance facilities at Kaunas and Rygge. These facilities were to be constructed as cost effectively as possible on existing apron / adjoining existing apron / new apron, as the Airport decided. A brief was prepared for a structural steel solution and a fabric tent. These were tendered to several contractors internationally and locally. In conjunction with the airports, 2 totally different projects were developed.

In Kaunas, it was decided to build a steel frame on foundations with the hangar door adjacent to existing apron. The Airport Authority then laid the hangar floor with precast concrete slabs which had been part of the old runway. The building was constructed by YIT. The roof is a steep sided portal frame. This design was the result of a design load analysis to reduce the imposed loads from snow. The building is a light and airy building. The door was provided by Champion doors.

In Rygge, it was decided to erect a fabric tent. Rygge Airport provided a new hangar floor slab and access to the taxiway. Giertsen then erected a fabric, insulated hangar. The hangar has no natural light, but is a fit for purpose building. 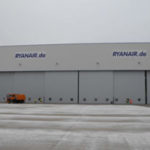