As part of an expansion of Lufthansa Technik, they decided to build a five bay facility in Aguadilla, Puerto Rico.

In October 2013 we visited Puerto Rico with the LHT team. In conjunction with the team, we prepared the concept layouts for the project, which were tendered in January 2014 using the Design Build model. Work on site began in July 2014 and was completed in November 2015. The first line of the 5 bay facility commenced operations in July of 2015.

The project construction budget was approximately $45million, of which $40million was funded by the Puerto Rican development board PRIDCO. Haskell were selected as the main contractors and used mainly local subcontractors to deliver the project. This resulted in a very cost effective, fit for purpose hangar which conformed to the US regulations, including NFPA 409 and OSHA requirements.

The building is a five bay hangar with workshops, stores, amenities and offices. Total area is approximately 20,000m2 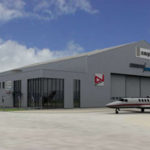